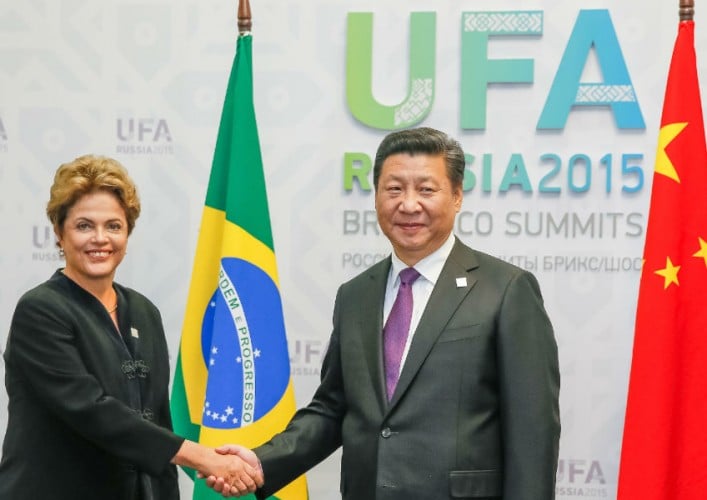 Last year’s launch of the New Development Bank (NDB) in Shanghai marked a remarkable step in the history of the BRICS grouping. After being a mere investment category between 2001 and 2007 and an informal platform between 2008 and 2014, the launch of the NDB is the beginning of a new era for an unlikely grouping that has been confronted with broad skepticism and rejection in the Western media since the very beginning. Born as a political outfit at the height of the Western financial crisis of 2008, it is no exaggeration to say that the BRICS grouping is, along with the G20, the most important innovation in global governance since the turn of the century. While the Asian Infrastructure Investment Bank has received far more media attention, the NDB began operating this year with initial capital of $50bn, a significant sum when considering that all members are also part of several other development banks. The five BRICS countries all have equal voting shares.

Read also
Why Washington struggles to understand the BRICS
What Do State-Owned Development Banks Do?
The pension problem at the heart of Germany’s envied economy

The NBD (often called BRICS bank) has faced strong pressure from international civil society from the start regarding its transparency and environmental standards. Though some of these concerns were egged on by subtle sinophobia, they were right to signal early on that the new institution would be subject to intense global scrutiny.

Irrespective of whether ONGs had any impact on the new bank’s decision makers, it is remarkable how explicitly they seem to have embraced environmental issues — at least in their announcements prior to the first series of loans. NDB President K V Kamath recently promised that the projects to be approved — one in each BRICS member country — would be “mainly infrastructure and green energy ventures”. On the sidelines of the G20 in Shanghai, Russian Finance Minister Anton Siluanov said the NDB would have a “priority on green energy developments.”

The grouping’s focus on environmental issues is not entirely novel. The topic featured prominently during debates at the 5th BRICS Summit in Durban in 2013.  In April 2015, the ministers of the environment from Brazil, Russia, India, China and South Africa, along with the executive director of the United Nations Environment Programme (UNEP), met to discuss a road map for transitioning to green economies to ensure sustainable development, without compromising on their competitiveness.

A lot suggests that this won’t be mere empty talk, for leaders in Beijing in particular now regard climate change and pollution to key threats to their legitimacy. Partly as a result of rapid and largely coal-fueled industrialization over the past three decades, China faces a public health crisis due to large-scale environmental damage. Responsible for a third of the world’s carbon-dioxide emissions, China’s domestic environmental conditions are appalling: a third of the country’s surface and more than half of its underground water are unfit for human contact, and air pollution is thought to kill 1.6 million Chinese per year. In addition to the economic cost, China’s toxic environment negatively affects Chinese citizens’ perceptions of their government, and the issue frequently leads to public protests. In response, the government has begun to adapt and there has been a considerable increase, in both relative and absolute terms, of energy generated from non-fossil fuels. China today produces more solar power than nuclear power. Wind, water and solar power put together already account for roughly one third of China’s total electricity-generation capacity. Furthermore, China’s Central Bank and the United Nations Environment Programme (UNEP) have launched a “green finance task force” to promote the issue, still incipient in China.

In 2014, as part of a landmark climate agreement with the United States, China promised that emissions would peak in 2030, and it is now spending far more on renewable energy than any other country, including the United States. In 2015, it announced the creation of the biggest national market for greenhouse gas quotas in the world. Beijing is also a world leader in wind power and second in solar power only to Germany, a remarkable achievement considering that the country began to invest in green energy at a much later stage.

Still, until the first funding decisions have been taken (to be expected in April) it is too early to celebrate the NDB as a transparent and environmentally-minded institution. Recent announcements, however, are a good start, and provide material for civil society to pressure NDB’s decision-makers to live up to their noble promises.

This article was originally published in Post-Western World. Read the original here.