English, Politics Gender in post-2000 wars: the role of women in the battle field

Gender in post-2000 wars: the role of women in the battle field

Despite some advances, women are still excluded from the warfare

In society, gender constructions define the “expected” behaviour of man and women. Femininity is normally associated with women, while men should be the example of toughness. In warlike situations, these concepts do not differer much. For centuries, wars have been mainly understood as a masculine “space” in which men have central roles: they are the soldiers, the war crime perpetrators, and the guardians of the vulnerable. In this sense, women in conflict zones are generally portrayed as weak individuals, even though they have gained more space in wars in the past decades. They are more integrated in the armed forces of many countries as well as closer to the frontlines. Still, the war remains a men’s place. The numbers not only confirm that women are just a small proportion of the troops in the field, but also show that female officers are excluded from the most prominent war posts. Therefore, gender continues to be a barrier for female officers in the post-2000 wars.

In warfare, male officers are the vast majority. The uniformity of gender is still striking, highlights Joshua S. Goldstein, professor emeritus at the American University. There are, however, some women. Thus, it is important to look into how post-2000 wars face the question of gender in relation to women in the military, debating some of the reasons why modern wars are still a masculine “space” and how women are kept aside from the highest level positions in conflict zones.

Gender as a barrier

In North America and Europe, for instance, the way women interact with conflicts have dramatically changed since the Second World War. During that period, their role in the war effort was focused in two aspects: the domestic sphere, as carers for the family in the absence of their husbands, and as the replacements for the male force in the industries. Their presence in the armed forces was limited to activities like nursing, as Penny Summerfield, professor of Modern History at University of Manchester, remarks.

To some extent, a different scenario has developed in the post-2000 wars in these countries. While women are still seen as vulnerable and prone to be abused, they have also accessed positions once closed to them in the armed forces. Some female officers have even been deployed to conflict areas. The bigger picture, however, shows wars and the military squads as male dominant environments. Women are an absolute minority in the armies of the countries in which their enrolment is allowed, and are even fewer in warlike situations.

In the United States army, for instance, female members make up for about 16.3% of the active troops, against 9.8% in 1983. Currently, they can serve in 95% of all Army occupations. Until January 2016, they will be able to take part in combat roles and to apply to all military occupational specialties. In the 2003 Iraqi intervention, the U.S. army had only 15% of its troops composed by women. And it is not so different in other countries. In Canada and Australia, women represent aorund 12% of the overall troops. In Israel, where military service is compulsory for both men and women, the numbers are higher: women represent 33% of the army. As women are underrepresented in the armed forces, the same tends to happen in wars.

Women are also underrepresented in the United Nations’ peacekeeping missions, even though the organization has policies to include them in all roles. In December 2013, there were 98,200 troops spread in 18 UN peacekeeping missions around the world, but only 3,753 of them were women (3.8%). In MONUSCO, the UN Mission in the Democratic Republic of the Congo, from the 21,198 soldiers, only 2.7% were women. Since March 2013, MONUSCO has an “intervention brigade”, with an artillery to neutralize armed groups. The mission is located in a combat zone but it has only 519 women, not all of them in the frontline – an indicative of how male dominated these positions are.

The male prevalence on the battle field goes beyond demography. The narrative from General Janis Karpinski, the sole U.S. female military commander in Iraq in 2003, enforces that these women were part of an institution which is deeply gender biased. As Laura Sjoberg and Caron E. Gentry note: women were put in a masculine environment, in which pornographic movies were still shown prior to the execution of missions. According to Karpinski, the female soldiers were often de-gendered and masculinised. After the human rights abuses at Abu Ghraib detention center, Karpinski accused male commanders that “did not want her to succeed” of hiding the situation from her. The accusations might be questioned, but they do show an intense gender struggle inside the army. 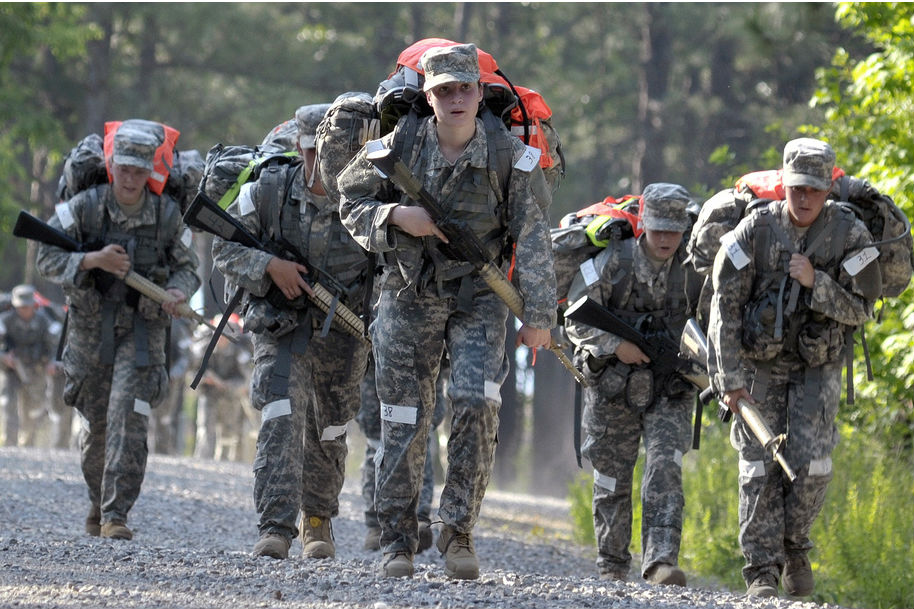 Women have overcome a wide range of challenges to achieve prominent positions within the military structure. Female officers seem to have increased in numbers, contributing to more deployments in warlike situations. On the other hand, they continue to be excluded from some positions, such as the combat units. Furthermore, women struggle to reach posts in the high hierarchy of the military, including positions in the battle field.

In the US army, for example, there were only 14.2% female officers ranked as Majors and above in 2012. Only 10.9% of the women had grades of Sergeant first class and first Sergeant. In Israel, the scenario is even worse: only 4% of them are ranked as Colonel, and 12.5% as Lieutenant Colonel. If women are not more equally represented in the prominent posts of the army, it is less likely that they will occupy leading positions in war operations.

In Iraq, General Karpinski was the only woman in a command post in the U.S. military. In this sense, one can easily argue that the gender biased military culture prevents women from being promoted to top positions in the sector, as they may seem unqualified due to the lack of experience.

Read also:
The construction of ISIS as a global threat
Boko Haram – terror in the name of Islam

Women are forbidden from applying to combat units in many countries, but there have been some improvements. In 1976, only 30% of all military roles were open to women in the U.S. By the 1990s, they were eligible to serve in elite combat roles as fighter pilots and naval officers, among other areas. In 2016, there will be almost no barriers to women. Nowadays, about a dozen of states, including Canada, Belgium, Netherlands and Denmark, allow female officers into official combat positions.

An amplified range of positions opened to women cannot, however, be considered a pathway to gender equality in the military. There are still many barriers. In order to become a soldier an individual must meet certain physical standards that might not be equally fair for both sexes, since the U.S. army is still conducting studies on how to integrate women into combat roles. According to a Colonel involved in the process, the purpose “is to develop gender-neutral physical standards to put the best soldier — male or female — in the right job”. This statement suggests that the selection process is unfair to women, who are usually shorter and have 30% more fat in their body mass than men – which puts them in physical disadvantage.

Despite recent advances, the road to the gender equality in the military sector is far more complex. Controlling an overly masculinised environment in the armed forces and defining fair standards of physical evaluation for the roles within the institution may contribute to attracting more women to a  military career. However, it is crucial to start building up a military culture free of prejudices towards women with progressive opening of posts once closed to female officers, signalling that gender is not a barrier to achieving the highest levels of the hierarchy. This is a massive challenge to a realm where men have always been the sole protagonists.

This article is part of a special series on gender in warfare. The next article will discuss the effects of the limits imposed to women’s participation in the battle field on their careers.