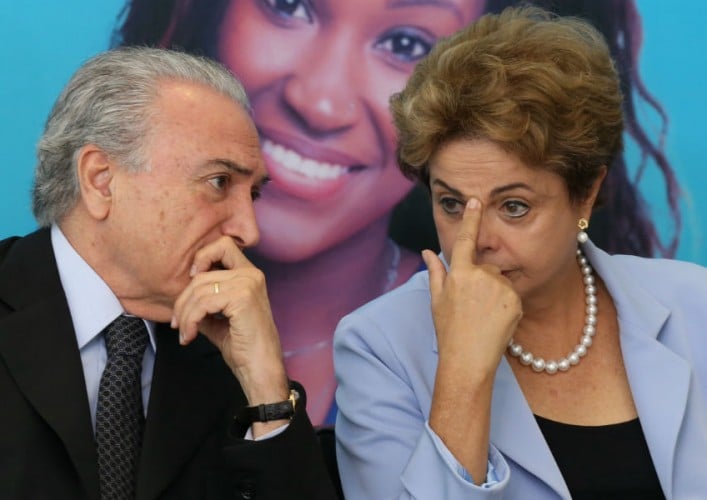 A cornered government, a legislative short of legitimacy, a contaminated judiciary and polarised protesters put Brazilian institutional balance to the test


This is the first article of Polike’s and OxPol’s special series on the political crisis in Brazil.

Immoral deals, Machiavellian manoeuvres and outright dishonesty. No wonder comparisons between Brazilian politics and the American TV show House of Cards are tempting and widespread. Even Netflix made the connection to promote the release of its fourth series in Brazil. This clever marketing initiative prompted Maurício Santoro, a political scientist, to joke on Twitter that “Netflix is the only institution enjoying the trust and esteem of Brazilians these days.”

But Brazil’s plight is not fiction, and the quip accompanies a concerning realisation. For some time, even in the face of turmoil and economic meltdown, it was possible to believe Brazil was taking a decisive step in its long walk towards a more legitimate and fair democratic system in which not even the most powerful authorities were immune to justice. Democratic institutions built and empowered over three decades of dynamic political activity after Brazil gradually broke the chains of dictatorship would remain firm, or so the story predicted, and would provide solid foundations for stabilisation and recovery. In the last few weeks it has become evident that this assessment was rather over-optimistic.

The hysterical polarised brawl occurring on social media and in Congress has now contaminated the Brazilian legal system. Its enduring impartial reputation unravelled fast following a stream of disputed decisions after the former president Lula was nominated Chief of Staff of the incumbent Dilma Rousseff in an alleged manoeuvre to protect him from being arrested. Lula is under suspicion of receiving illegal payments from companies involved in the corruption scandal of Petrobras, as well as of omitting two properties (both largely renovated by corporations investigated in the so-called Car Wash Operation) from the authorities.

The Brazilian political titan who governed the country for eight years during the 2000s and made much to elect Rousseff twice now seems to be the main target of the ‘Car Wash Operation’ conducted by the federal police and overseen by federal judge Sergio Moro. Since its beginning two years ago, the investigation has been largely successful in dismantling chains of corruption and exposing not only the political class behind them but also the extremely powerful economic actors involved in it. Ninety-three people have been convicted and $ 2.9 billion (BRL) in diverted money has been recovered.

Yet, this process was always treading the thin line between strengthening the basis of the Brazilian democratic system and exposing the fragility of its foundations. These are not necessarily opposite outcomes, but the situation has now come too close to a dangerous tipping point. After Lula’s nomination, judicial orders from lower courts, one of them issued by a judge who took part in anti-government protests, popped up all over Brazil, offering contradictory rulings. While the Supreme Court took too long to decide whether Lula could take over as minister, lower courts kept suspending and approving the former president’s nomination in a judicial yo-yo that exacerbated the political earthquake and shed suspicion on the whole system.

Meanwhile Justice Moro—so far largely seen as an impartial individual ahead of a serious and comprehensive operation exposing corruption practices of mainstream politicians and powerful business figures—had made a critical move when he decided to make public the contents of a series of tapped phone calls intercepted by the police while investigating Lula.

This occurred only a few hours after Lula’s appointment by Rousseff, and sparked a flurry of public quarrels in the legal community which heatedly debated the legality of the release. Courts, bar associations and prominent representatives of the legal community were pitted against each other in a torrent of public criticism.

A few days later, judge Teori Zavascki, who oversees the Car Wash Operation at the Supreme Court, took over the case involving Lula from Moro and demanded an explanation of why he had released taped phone calls involving Rousseff and other ministers (who cannot be judged by lower jurisdictions without authorisation from the highest court).

Moro eventually apologised. In this sense, his move in releasing the calls was largely seen as a deliberate attempt to damage the public image of Lula and Rousseff. As a result, his credibility to judge with independence may now be seriously compromised, along with part of the evidence in the Car Wash Operation.

The judicial system, of course, is only the latest of the Brazilian democratic institutions to stagger. The Chamber of Deputies, which governs the current procedure to impeach Rousseff, is presided over by Eduardo Cunha, a man who has been recently indicted by the Supreme Court over accusations of corruption and money laundering, revealed by the Car Wash Operation. Furthermore, a quarter of the members of the commission responsible for defining Rousseff’s future are also under investigation by the Supreme Court. They are suspected of committing, among a vast list of other crimes, electoral fraud, money laundering, corruption and criminal conspiracy. Although there is great pressure for the ousting of the president, the procedure led by these individuals suffers from evident legitimacy flaws.

Apart from the controversial impeachment process, the Senate has come up with creative solutions to solve the crisis, including a move to implement a parliamentary system with a prime minister, which would transform Rousseff into a nominal figurehead. This idea, which revives a parliamentary project thoroughly rejected in a previous referendum, was brought forward by the president of the Senate, who also holds a track record of scandals. The creation of a commission to assess the proposal has been postponed, but this move exposes how legislators are prone to use wide interpretations of the constitution in the search of a short-term solution to the crisis, in order to divert public attention from their own wrongdoings.

The Brazilian political class is in tatters. After the release of a list with the names of hundreds of politicians who have received campaign donations made by the construction company Odebrecht, a corporation largely implicated in the corruption scandal of Petrobras, it became even more evident that the main political actors have much to explain. In the face of the unpredictable results of the on-going investigations, they are in a desperate search for shelter and no longer have attachment to party loyalty or even to pre-crisis alliances. The government is in pieces due its own failures in the economic sphere, due to pressure from the Car Wash revelations and the consequent collapse of its popular support. It has also consistently failed to find common ground with its own base in the Lower House. The motley crew forming its political coalition is prone to disband at the scarcity of pork to feed its political demands, as has been demonstrated all too often since the beginning of Dilma’s second mandate in 2015. The ultimate result of such instability was the departure of PMDB  (Brazilian Democratic Movement Party) from the coalition government last Tuesday (29th March). PMDB was the largest party of Rousseff’s coalition and, until then, its strongest ally. The party will now openly work to impeach Rousseff. If it succeeds, its own leader, vice-president Michel Temer, is the next in the succession line and will be the new president of Brazil until elections take place in late 2018.

Rousseff’s administration is desperately negotiating with smaller parties, handing out government assignments to remaining allies in a final attempt to hold the number of votes necessary to reject the impeachment in the legislative houses. Cornered, the government is also turning its hopes to its base of left wing supporters, who fiercely argue the impeachment process is a coup d’état. They have a point: the president has not yet been officially charged of any crime. Highly ranked officials in the government, including the president herself, have pointed this out.

In the opposing corner is the country’s economic elite, stirred up by industry lobbies and alternative right-wing movements. It is fuelled by a great many legitimate grievances such as poor administration and the evidence of corruption made public by the Car Wash Operation, but it is also led by the prejudices of a privileged social class which discourages more widespread support for the movement. The traditional opposition tries to side with protestors but some of its main figures are also under investigation for corruption. There is little sympathy.

At the extreme ends, both those in favour of Rousseff’s ousting and those against it have considerable representation and have displayed this through massive street demonstrations all over the country. Although no major incident has been registered, they are also prone to clash. The division is also evident in civil society organisations, with some siding with the government and others calling for impeachment.

The events in Brazil are thrilling, fascinating and unpredictable, just like a good TV show. But it is not the entertainment which invites most comparisons now. Brazilian democratic institutions — corroded by corruption, self-interests, pork-barrel politics and political polarisation —are frail and may eventually fall apart, like a house of cards.

Holds a MA in International Relations from the University of East Anglia and a MBA from FGV-RJ. Pinheiro graduated in journalism from Universidade Federal do Rio Grande do Sul and has worked for several news organisations in Brazil.